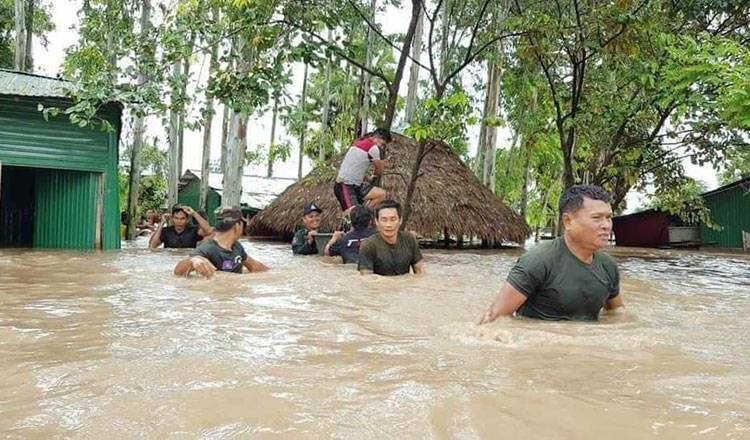 Prime Minister Hun Sen has expressed his thanks to relevant ministries and institutions and authorities at all levels for their attention to timely assist flood-affected people. In a message posted on his official Facebook page Sunday , the Premier also asked them to continue to take necessary measures against the floods to reduce to the maximum the difficulties and the impacts on human lives and properties. Moreover, he thanked charitable people for their donations to support the victims of ongoing flash floods. The Prime Minister also called on the citizens, particularly those at the flood-hit areas, to pay attention to their own safety and that of their family members by moving to safer grounds. According to the Premier, as some parts of National Road No. 5 have been under flood waters, on Oct. 11, Pursat provincial administration and Battambang Provincial Department of Public Works and Transport issued announcements to suspend all forms of heavy trucks on the national road to ensure safety and avoid any possible accidents. A new weather forecast released yesterday by the Ministry of Water Resources and Meteorology showed that more rain, from moderate to heavy, is expected to come across Cambodia for some more days, therefore the country will face continued flash floods. The north and northwestern provinces, next to Dangrek and Cardamom mountain ranges, would be the most affected, while the coastal areas would face rain, strong wind and high waves, the same source stressed. Flash floods have been hitting Battambang, Pursat, Banteay Meanchey, Oddar Meanchey, Preah Vihear, Kampong Speu, Stung Treng, and Siem Reap provinces by inundating houses, schools, administrative offices and other infrastructures, as well as rice fields. National Committee for Disaster Management and other concerned authorities have inspected the flood situation in the affected areas and distributed relief to the victims. The cost of damage has not been estimated yet.
Flash Floods News In English Flood Victims