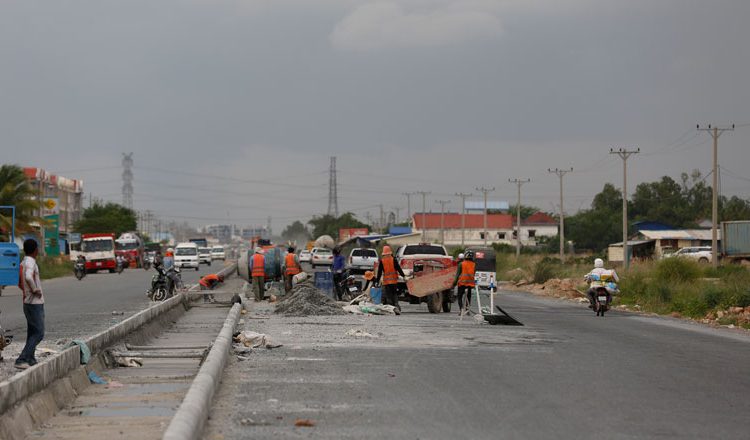 The improvement project of National Road 3 that links Phnom Penh to Kampot province has now reached 89 percent. The project started in May 2018 and is estimated to cost approximately $219 million. National Road 3 is one of the most significant national roads in Cambodia because there are many industries and factories all along the road, making it an industrial corridor to the south, in addition to National Road Number 4, the country’s first industrial corridor. The upgraded National Road 3 will also connect Cambodia’s natural tourist and coastal areas to Phnom Penh, the heart of the country. Once completed, the road will contribute to people’s travel and facilitate the transportation of goods, especially salt produce from Kampot to other provinces as well as tourism activities in the northeastern part of the Cambodian coast at a faster pace and probably lower costs. Before the project was started, the road was only nine metres wide. The project is funded by the Royal Government’s budget and preferential buyer’s credit loan from the government of China. The project is expected to be completed earlier than expected and be finished towards the end of 2021. It is being constructed by China Road and Bridge Corp, with a technical adviser from Guangzhou Wanan Construction Supervision Co Ltd. The road runs from Phnom Penh’s Choam Chao roundabout where a flyover that is being built is also close to completion. The Ministry of Public Works and Transport announced to the public that it apologises for the impact and disruptions during the construction. People living close to the construction however have complained of noise pollution and the area being dirty. Prime Minister Hun Sen has explained that this project is very important for Cambodia. “Once National Road 3 is completed, people will save much time and costs in traveling. Through this road, people who want to visit Sihanoukville can also travel along this highway. In the same way, those who reside along this road will see their income grow through various economic activities” he said. A direct consequence of the upgrading works of National Road 3, has led to property values jumping significantly in the past few years. Land value from Chaom Chao to Kampong Toul Bridge, the border between Phnom Penh and Kandal province, is now valued at between $200 and $400 per sqm since it is suitable for residential projects. On the other hand, land and real estate from Kampong Toul Bridge to Ang Tasom, land considered to be suitable for industrial development, is valued a between $20 to $80 per sqm. While land from Ang Tasom to the Kampot Train Station is valued at $10 to $20 per sqm. Po Eav Kong, Managing Director of Asia Real Estate Cambodia Company said: ”Infrastructure developments are pushing land prices to increase. And for the past two years or so, the price of land along National Road 3 has risen by 10 percent year-on-year.”
National Road 3 Infrastructure Development